Why Shall We Urge African Youngsters To Consider A Career in Tech?

In 2016, two young Nigerians studied the Nigerian financial system and saw a big lapse. There wasn’t an easy way to make online transactions with their mobile phones, and the platforms available weren’t tailor made for African businesses to thrive. So, they set on a journey to help solve a problem and make African businesses more efficient and profitable. That initiative to help the African continent, resulted in a $200 million acquisition of the company by Stripe in 2020 . Shola Akinlade and Ezra Olubi, the founders of Paystack, showed the world, and young African creatives and IT specialists, that they can make something different and create a mark in the world by helping the continent in any way that they can.

The Paystack story means more than meets the eye, for African youngsters considering a role in technology. More businesses want to invest in the young African tech community. In March of 2019, Microsoft officially announced the availability of its cloud services in South Africa. Thus, Cape Town and Johannesburg became the first global providers to give cloud services from data centers within the continent. In May of the same year, they created the Africa Development Centers (ADCs) in Kenya and Nigeria. These development centers serve as the premier center of engineering for Microsoft in Africa, and gathers world-class talents who can create solutions for Africa’s problems and spur development across the continent. Venture capitalism in tech startups has seen a steady continuous surge, and companies like Y-Combinator and Sunfunder have put enormous amounts into African tech-startups like Bamboo, Cowrywise, Kudi and Paystack. 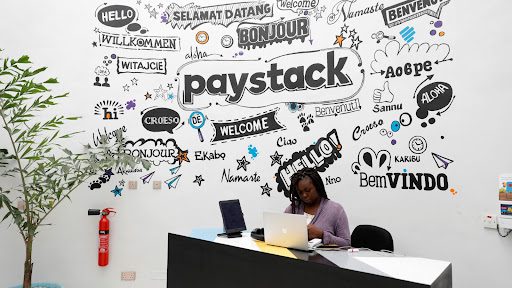 Github also records that the African tech community has seen enormous growth on their version control platform. “Nigeria is one of the fastest growing communities on Github, and we are really impressed”, GitHub CEO Nat Friedman said on a fact finding mission to Nigeria. During a meet up of the top 50 contributors in Github from Nigeria, the Github CEO recommended African developers for their world class attitude to work and technical abilities. So, why shall we urge African youngsters to consider a career in technology?

The Abundance of Opportunities

Africa has become a hub for development of technological talent over the past five years. As more companies look to scale their operations to suit the new normal created by the COVID-19 pandemic, the need for competent and efficient tech professionals has never been higher. Companies that had little to no presence or interest in technological solutions have become handicapped by the looming realities of an economy run purely digitally and in remote conditions. New frameworks have to be created to support existing structures and prepare them for integration into the tech ecosystem. In 2020, Google released a report and summarised that although there was to be an estimated contraction of the region’s economy by -3.2% in 2020 from a 3.1 % growth the previous year, the African internet economy had the potential to grow to $180 billion dollars in generated revenue by the year 2025. Since the year 2000, there has been a growing number of people with access to internet services around the continent, with the population going to 520 million people as of 2019. The existence of new infrastructure that can support this growth has significantly helped the process, and companies like Amazon, with their Amazon Web Service (AWS), have already started to lay down the basic frameworks, creating modern data centers in regions around South Africa. It showed that the African continent survived and grew its internet capabilities against all odds during the covid-19 pandemic, and has seen sufficient enough growth to attract investors.

More startups are employing tech solutions around key areas of their operations, and with the discussions on racial inclusion and diversity in the workplace becoming louder and more emphatic, the opportunities to participate in the global technological revolution has never been higher. Training institutes like Andela have created platforms for hiring the best talent on the continent, with their internship programs turning out thousands of job ready developers at varying levels of experience and creating job opportunities for starting out junior developers to get the experience that they need to go forward in their careers. 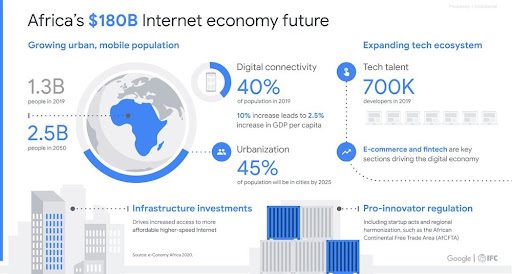 There is an abundance of opportunities to make a career in IT. The European Investment Bank released a report showing activities and frameworks it has set in place to support the developing African digital economy. “The deployment of fibre networks is currently focused on large urban areas (for example, GVA has introduced a fibre offering in the capital cities of Gabon, Togo and Congo) and on major axes (Orange is deploying an international network linking eight West African countries, while Liquid Telecom has established the One Africa network connecting Cape Town to Cairo over 7 000 km). These efforts are complemented by small-scale fibre operators, which are expanding their investments beyond the wealthy suburbs and business districts. In these remote areas, aerial fibre is a cost-effective alternative to underground networks requiring significant civil engineering expenses” (Culled from The Rise of Africa’s Digital Economy- The EU Bank). This shows an active interest and investment in Africa by companies outside Africa, leading to the creation of jobs and multitudes of opportunities for young African professionals.

Now more than at any time in Africa’s history, being able to work remotely from any part of the continent and with any company in the world is a real possibility and this opens up great opportunities to make careers only a few could dream about. Google recently approved the application of 85% of its current workers request to work remotely.
The increasing internet connection speed also creates the enabling platform for remote working, as more companies within Africa can afford digital solutions. It opens the doors for more companies to take applications from low-income regions like Africa, and more young professionals are getting hired off Zoom interviews than in previous years. As developers and IT personnel, the possibilities are endless for hiring opportunities outside the continent. Freelancing sites like Fiverr and professional social media platform LinkedIn provide the necessary framework for young skilful professionals to get higher paying jobs online and make a career off freelancing. Working from home also allows students in Universities around Africa to practice their craft professionally and earn on the job. The Google Developer Students Club is one of those platforms that help students to “bridge the gap between theory and practice”. You can connect with developers around the world and learn from the top talents around you.

There are few jobs in the world that pay higher than tech jobs. The average Senior Developer earns about $150,000 to $200,000 per year in most firms in the US The Junior Developer roles in Front-end development start at $30,000 for small companies, and smaller roles to about $120,000 for more developed roles and skill sets. These figures are staggering compared to the average salary of most workers in the continent. In fact, the minimum wage of a worker in a country like Nigeria is N25,000, about $60, and shows the amount of value placed on you as an IT specialist. The price range goes up for even more specialised roles, like a Network Analyst and an Artificial Intelligence engineer, which can be as high as $240,000 for a Senior role, and $120,000 for a Junior role. Depending on the company hiring you, more benefits might be added to your official salary (bonuses, paid leave, a new macbook for instance) and the more valuable you become, the more you can earn. Being able to earn more means that you can contribute to the overall economic state of the continent. Also, there is a higher percentage of job security as an IT personnel, and depending on your skill sets and specific work output you can come close to being near indispensable to your company.

You also have the choice to work as a freelancer and earn without officially being a part of the company. You can get contract jobs and work with a company for a fee that you dictate, and these fees can be adjusted to suit the job specification and company that you’re working with. You can charge from about $25 per hour for a less experienced developer to as high as a whopping $300 per hour, depending on your specific skill sets and abilities.

How can I learn An IT skill? 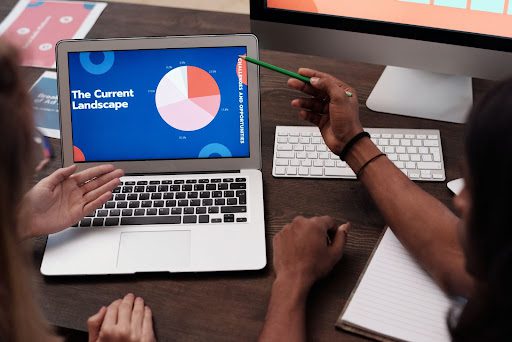 So now you’ve seen the benefits of becoming an IT personnel, but how do you learn the skills necessary to start your career in tech? There are a lot of routes to follow to become an IT personnel, but the path we recommend the most is to take a certified course from a reputable brand that teaches core IT principles. Learning at your own pace and being able to apply what you’ve learnt through projects that can eventually appear on your portfolio and improve your chances of getting hired by top recruiters around the world is vital. At Yekola Academy, we offer online IT courses that are tailor made for you. You can learn at your own time, and take lessons with projects that are applicable to real world situations and build your problem-solving abilities. Check out our courses and find the one that fits your needs, and prepare for a profitable career in technology.

The bottomline is this: there is a huge opportunity to plug into the ecosystem that is the evolving African tech space. The massive room for growth in Africa recognised by the biggest technology players in the world has led to investments in the region that has taken IT to a new phase in the continent.

Check out the IT courses offered by Yekola Academy!

Ready to start your learning journey?